Ragout...a perfect meal for these cold and snowy days. 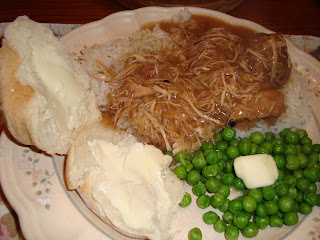 2 cups all purpose flour, browned...(technique follows)
4 pigs's feet or ham hocks
2 chicken breasts, cooked and shredded
2 pounds meatballs (recipe follows)
1 large onion studded with 8 or 9 whole cloves
1 cinnamon stick
1/4 tsp nutmeg
2 bay leaves
1/2 tsp salt
1/2 tsp pepper
Water, or chicken stock to cover by 2 inches.
MEATBALLS:
1 pound ground beef
1 pound ground pork
1 onion, minced
3 cloves garlic, minced
1/2 tsp ground cinnamon
1/2 tsp ground cloves
1 pinch nutmeg
salt and pepper
2 slices of bread, soaked in milk and squeezed dry
1 egg, beaten
TO BROWN THE FLOUR:
Turn the oven to it's highest setting, and place rack in the middle.
Place flour in an oven-proof skillet, place in oven 4-6 minutes , then stir.
Repeat this process watching carefully so it doesn't burn, 4-6 times, stirring each time until the flour is a light caramel color. Remove from oven and reserve.
MEATBALLS:
Mix the meatball ingredients and make balls about 1 inch in diameter. place on a sheet pan and bake 15 minutes at 350°
RAGOUT:
In a large Dutch oven, place the ham hocks, studded onion, bay leaves and salt and pepper. Cover with chicken broth or water by two inches and bring to a boil.
Reduce heat and simmer 2 to 2 1/2 hours, until meat is tender. Remove from heat and let meat cool. Discard the skin and fat from the hocks and pull the meat off in chunks. Remove as much fat as possible from the broth.
Return the pork to Dutch oven , add chicken and meatballs and bring to a boil. Make sure the meat is covered with broth (add stock if necessary) and reduce heat to simmer.
Mix the browned flour with cold water a bit at a time, until a thick paste has formed.
Place one large spoonful at a time into the pot and stir until desired thickness is obtained.
Serve over hot boiled potatoes.
Here is how it goes, step by step:
This dish, like so many others evolved from leftovers from the holiday celebrations..it seems much of peasant food did come into being that way.

Since I had no leftover chicken, I put a fryer into the pot with some bay leaves, onion, peppercorns and salt and let it simmer until it fell off the bone. 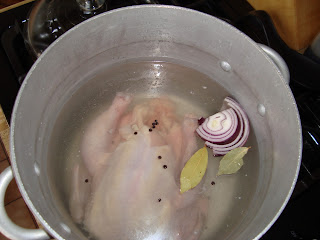 It was then time to turn my attention to the meatballs...I used a lovely pork, veal and beef mix they had at my local market. The pork shoulder also went into the pot when the chicken came out. 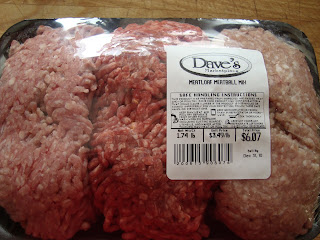 When I tossed the shoulder in to simmer, I also put in an onion that was well-studded with whole cloves...simmered until it was ready to pull. 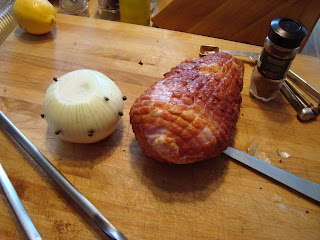 While that was simmering, I soaked some bread in milk, measured out the rest of the ingredients for the meatballs, and got to work. I like to add the spices to the egg before it goes into the meat mixture...I feel it gets a little better distribution that way. 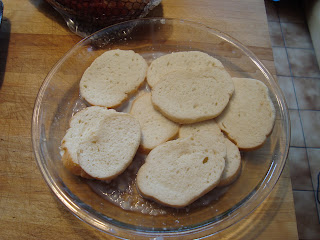 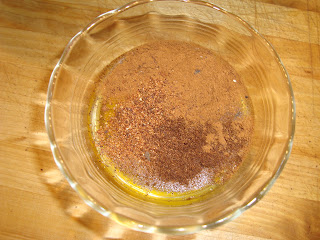 Then mix it all up and make the meatballs 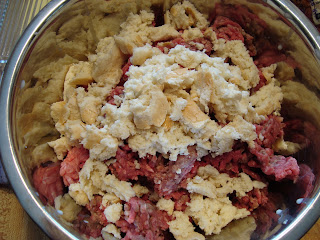 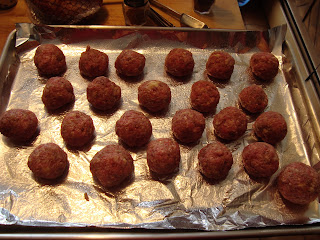 Into a 350°F oven they go, for about 15 minutes...just want to brown them..they will finish cooking with the other meats.

It was at this point, when I took them out of the oven that I realized I had forgotten the onion and garlic

, so I gave then a liberal dusting with granulated garlic and onion salt. 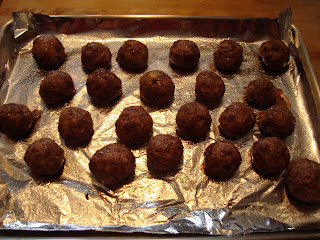 Now it's time to pull the pork and chicken and get everything back into a large stock pot. 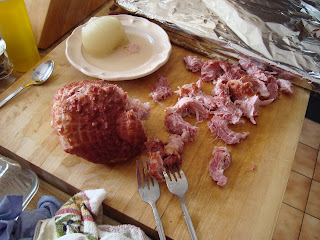 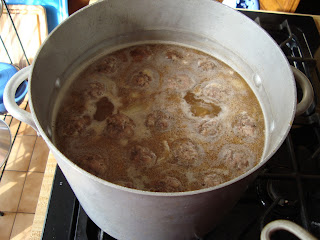 Since I keep a large jar of pre-made roux in the fridge, that is what I use to thicken my ragout, rather than going through the painstaking process of browning the flour and smelling up my whole kitchen. 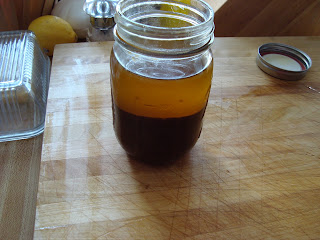 Let it simmer for a while and have all the ingredients get to know one another, then boil up some potatoes and/or rice and serve. 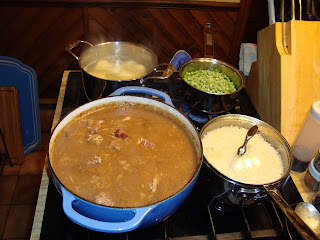 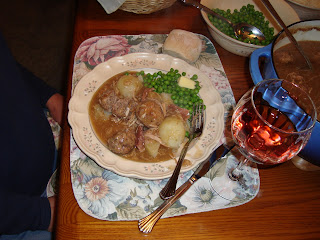 Well, it was cold and rainy, just as the weatherman promised so I decided to make a nice pot of hot Guinness Beef Stew.

I'm a firm believer of "mise en place", prepping everything and having it ready before you start, so that's what I did. Prepped the sirloin tips, onions, carrots, celery and mushrooms and then got started. 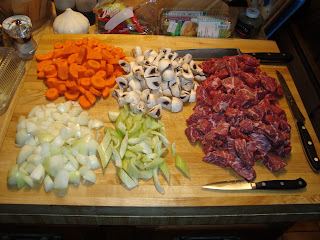 Then we just get out the dutch oven and start browning the meat, seasoned with salt and pepper. Had to brown it in batches so as not to crowd the pot. 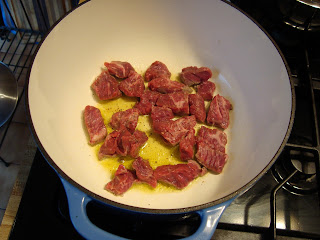 After the meat was browned, I started to saute the vegetables until the onions were nice and translucent. 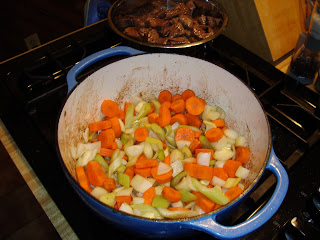 Then I deglazed the pot with the Guinness Draught and added the thyme and brown sugar. 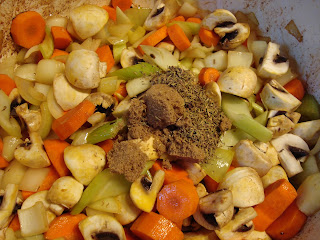 Then put the browned beef back into the pot and cover with beef broth. 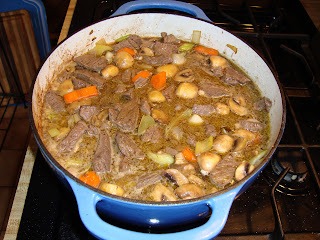 Bring the whole thing down to a simmer and cook until you think it's done. I simmered it for about 2 hours, then thickened and served. Made a slurry of flour and Guinness, shook it up good and poured it in to thicken the stew. 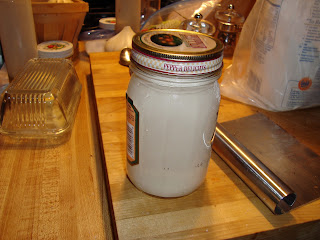 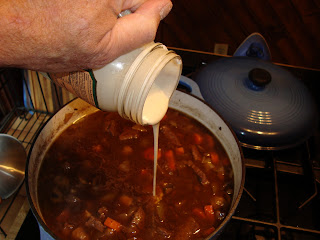 Thickened it up for a bit, then served it with piping hot pull-apart garlic bread.
It was darned good if I do say so myself.


If you want the detailed recipe, use the link on the right to the Foods of The world Forum 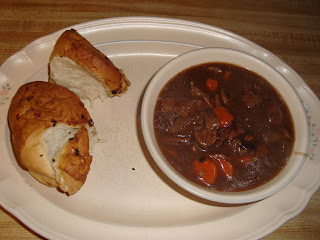 77 in Woonsocket is my buddy Larry's newest adventure. Those of you who are local may remember 77 as "The Embassy ", which was renown for it's family style chicken and it's meat sauce.
Vast improvements have been made to the interior and exterior of the building...outside the parking lot was done over, the building painted and cleaned up.

Inside you'll immediately notice a much brighter lounge area...this area just inside was always very dark...almost dreary. It has been brightened up and redecorated. Four flat screen TVs around the room, and the addition of several high top tables make this a very comfortable location to watch a ball game.

There are 15 seats at the bar itself, and ten beers on draft. As you can see above, it is much, much brighter.

This was a "soft" opening we attended last night...keep your eyes open for the real deal in the very near future. The pulled pork sandwich was terrific, and the chicken wings were good as well. The "77" theme is continued throughout the cuisine with the use of "7 herbs" "7 spices" etc. A cute gimmick and a very tasty one as well. I particularly enjoyed the sample of the "death wings"

Mandy and Kerri took very good care of us and I'm sure they'll take good care of you too, when you go.
Posted by Dave at 1:57 AM No comments:

Four days of rain and cold

It looks like New England is in for four days of rainy, windy, colder than normal weather. What's a normal temp this time of year? The proverbial witch's body part comes to mind.

It looks like I'll be stuck in the kitchen for a few days, not that I mind at all...perhaps it's time to make the annual huge batch of golabki to get us through the winter. It is most certainly comfort food time...even a beef stew or pot roast with Guinness gravy is sounding good to me.

Whatever I decide to do, it will most certainly get posted here. Check back to see what I decided on.
Posted by Dave at 4:51 AM No comments:

The party went very well last night. Our guests began arriving around 5 and were all here by 5:30, when I started the process of making the paella. The wife had set up a nice table out on the deck...it was a little chilly, but we figured it might be one of the last chances we get this season. 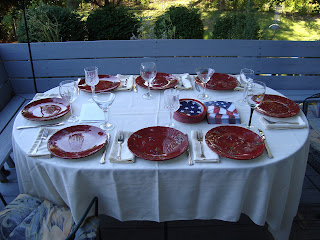 It turns out this was also an anniversary party for two of the couples attending...Scotty and Dawn Happy 8th, and Peter and Caroline Happy 18th!

I put the paellera on the grill, coated it well with extra virgin oil and saute'd the chicken until it was beginning to brown. 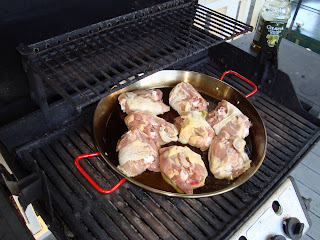 I then removed the chicken and saute'd the chorizo, onions and garlic until the sausage rendered some of that lovely pork fat. Then came the rice and spices, the hot broth and I returned the chicken to the pan. 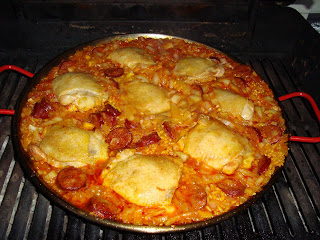 We let that simmer until the broth disappeared (had to add the broth in two stages as it would not fit in the paellera) . Then we added the littlenecks, mussels and shrimp and let it cook until the shrimp was pink and the clams opened. 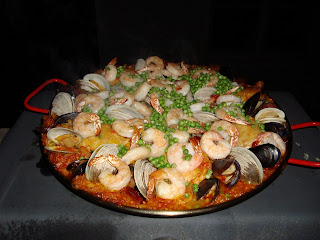 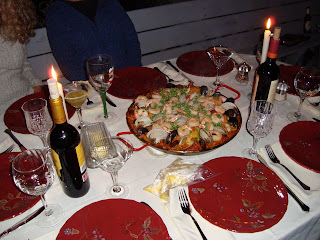 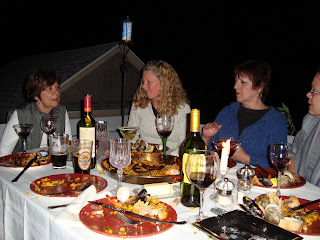 After that it was eat, drink and have a good time. We did our best to keep the neighbors up for a little while LOL.

All in all it was a great time, but next time will be 6 people only...the difficulty I encountered was fitting everything in the pan.

Ive been itching to learn a little bit more about this whole blogging phenomena, and figured the easiest way would be to start my own blog.
Since my early retirement, I've been able to concentrate on the things that really bring enjoyment, Strangely enough many of those things seem to emanate from my kitchen.
Today, in honor of my first blog entry I'll be making a nice big paella for some dear friends.  I've been wanting to do this for awhile, but paella is one dish that requires specific ingredients. Bomba rice, for example.....no other rice will truly create a paella like the ones eaten in Spain. Also the paellera (pictured above) is a crucial element.
I'm planning a traditional paella, with chicken, chorizo, shrimp, littleneck clams and mussels. It will be interesting to see whether or not I fall on my face.
I will update as the event transpires.
Posted by Dave at 3:06 AM No comments: